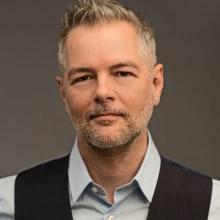 E Brian Johnson is an author, media producer and host of Nutramedica. He is a graduate of Ryerson University, The Apple School of Electronic Design at the University of Toronto School of Architecture and Centennial College, Toronto.

In addition to producing Nutramedica, he is a counsellor working primarily with young adults in the criminal justice system. Mr Johnson’s new book “The Little Wonders Playbook”, co-authored with Angie DeGeronimo, reveals a new framework for activating positive habits around health, mindset and relationships.

As a creative director and media producer, Mr Johnson has numerous audio and video credits to his name. He is a Canadian internet pioneer. He is a recording artist and music producer, performing under the name of Brian Asha. He champions the New Leaf Project, a game-changing solution for homelessness. Today Nutramedica is talking to Dr Jen Riegle, one of the founders of the Integrative Health Action Network, or IHAN, a group that engages integrative health practitioners to provide supp... Today, in part one of a two-part series, Nutramedica is considering how integrative health practitioners can assist with climate crisis management, and in particular, how they can render ... Karolyn Gazella is the founder of the Natural Medicine Journal and the CEO of Five to Thrive - as well as a co-host of their live radio show and podcast series. She is a well-known and we... Nutritional Fundamentals for Health (NFH) Inc. is gifting The First 18 business program from Clinician Business Labs to all new graduates of naturopathic medical programs in Canada or the... At Nutramedica we want to give you the tools you need to be at your best for your patients  everyday, so we asked practitioners across the country what they are doing to stay healthy.  To...