In The News With Karolyn Gazella: Focus on Dementia

Listen to Podcast
Stay up to date on contemporary developments in the natural health profession with Karolyn Gazella. Today we are talking about advances in the understanding of dementia.

The rising prevalence of dementia has been called a global emergency. There is no cure in sight. No society has devised a sustainable method of providing and paying for the care that people with it will require.

Alzheimer's disease, which accounts for 60-80% of dementia cases, is an umbrella term for a range of conditions. There is usually a mild loss of cognitive function and forgetfulness at the beginning of the illness. However, as it progresses, people become unable to take care of themselves.

Many require round-the-clock care long before they die.  Globally, approximately 50 million people suffer from the condition, which is expected to increase to 82 million by 2030 and 150 million by 2050.

Today we are talking with Karolyn Gazella about advances in the understanding of dementia.

Karolyn Gazella founded the Natural Medicine Journal in 1992 and has been writing about integrative health since then. She is a regular contributor to Nutramedica.

Defining the problem
The first thing is to remind ourselves that Dementia is not a specific disease but is rather a general term for the impaired ability to remember, think, or make decisions that interfere with doing everyday activities. Alzheimer's disease is the most common type of dementia.

Research out of Columbia University that was published in JAMA Neurology also showed that 22% of Americans have mild cognitive impairment, which underscores why this is a big concern.

Someone is diagnosed with Alzheimer's every 3 seconds.

The Centers for Disease Control and Prevention estimates that 40% of dementia cases could be delayed or prevented. Integrative practitioners can help their patients reduce risk of dementia.


Polypharmacy and Dementia
A new study investigated the link between polypharmacy and dementia. Using machine learning, the study examined health records to explore the patterns associated with polypharmacy. It was found that people who took three different medications had a higher risk of developing dementia than people who did not.

There were 33,000 people that they tracked for 25 years. So we do know that polypharmacy is problematic for the brain.


Is Dementia an Autoimmune Disease?
Researchers are speculating that the immune system in the brain is attacking beta amyloid, which causes the protein to attack healthy cells in the brain, which can lead to Alzheimer's, making dementia a form of autoimmune disease.


Oxytocin and Alzheimers
An animal study was done on mice that had dementia. After oxytocin was injected into their brains, the mice had better memory and could navigate the maze more efficiently.

We can enhance oxytocin naturally by hugging, getting a massage, touching and even eye contact. Eye contact with a pet can increase oxytocin by up to 300%.


Epigenetics, Omega-3 Fatty Acids and Dementia
A study involving people in the forties with a genetic predisposition to dementia found that those who ate a higher omega three fatty acid diet reduced their risk of developing the disease. This is just a beautiful illustration of epigenetics in action. So with our diet and lifestyle, we can actually influence how our genes behave. Even with something as devastating as dementia.


Sleep and Dementia
When we fall asleep, there's a system in the brain called the lymphatic system that sweeps away debris, including amyloid proteins that actually can lead to dementia or Alzheimer's. So if you're not getting enough sleep, the lymphatic system doesn't detoxify your brain as you should. So sleep is absolutely critical.

Practitioners should look at the sleep habits of their patients. This is because insomnia and sleep disorders are clearly on the rise and so is dementia.

It's also really important for children. There was a recent study from the University of Maryland Medical School that showed that elementary school kids who didn't get the recommended nine hours had a smaller hippocampus where memory and learning and attention take place than the kids who were getting the full nine hours of sleep.

Turmeric
According to a review published in 2010, preliminary research suggests that turmeric may boost brain health and stave off Alzheimer's disease by clearing the brain of beta-amyloid. The buildup of beta-amyloid is known to form Alzheimer's-related brain plaques.

Ginkgo biloba
A research review published in the Journal of Alzheimer's Disease in 2015 suggests that a ginkgo biloba extract called EGb 761 may be helpful in slowing decline in cognition among patients experiencing cognitive impairment and dementia.

Bacopa
Research suggests that Bacopa Monnieri may help enhance brain function. For example, one study in mice showed that supplementing with Bacopa improved their spatial learning and ability to retain information.

Another 12-week study in 60 older adults found Bacopa extract improved memory, attention, and the ability to process information, compared with the placebo treatment.

Choline
Choline is an essential nutrient and a building block of acetylcholine. Acetylcholine is a neurotransmitter produced in the brain that plays an important role in muscle movements, thinking, and working memory. Problems with the production and use of acetylcholine are hallmarks of diseases such as dementia.

Studies in laboratory animals and humans suggest that consuming foods or supplements rich in choline may elevate levels of acetylcholine in the brain.

“We know that an autoimmune disease can attack any tissue in the body, for example, with me. my immune system attacks my hair follicles, which causes my alopecia. So what they were trying to find out is, does autoimmune play a factor in the in the cause of Alzheimer's?

They're speculating that the immune system in the brain is attacking beta amyloid, which is a protein which then causes the protein to attack healthy cells in the brain, which can lead to Alzheimer's. Now, if it turns out to be true, this could open up a wide field of study and treatment options for Alzheimer's”.

Tags
In The News
Mental Health 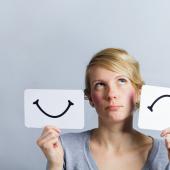